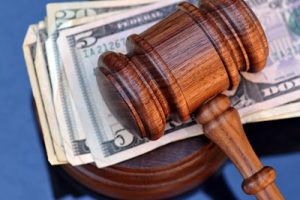 Beverly Hills stockbroker, Bambi Holzer, who wrote books, made television appearances and was the stockbroker to the rich and famous, or at least after she was done, the not so rich, has been suspended by the Financial Industry Regulatory Authority or FINRA, for the failure to comply with a $2 million arbitration award.

Holtzer’s career, which began at EF Hutton and later at Bear Stearns, appears to have been caught up in a downward spiral, as over the last decade or so she has been associated with 10 different firms of ever increasing obscurity including the defunct, scandal ridden Brookstreet Securities, and most recently Wedbush Securities.

Remarkably, Holtzer’s Public Disclosure Record is an astounding 112 pages long and reveals no less than 64 customer initiated investment related legal actions alleging fraud in connection with the sale of securities, including a lawsuit by one of her more famous clients, Julia Louis-Dreyfus (heir to the Dreyfus fortune and one of richest persons in Hollywood), for $4.4 million concerning a botched annuity investment.

One of Ms. Holtzer’s former employers, UBS PaineWebber Inc., paid out at least $11.4 million to settle dozens of investor claims that she misrepresented variable annuities by asserting they offered guaranteed returns. Now, it appears that on October 18, 2013, the Financial Industry Regulatory Authority Inc. filed a 27 page complaint against the already suspended Holtzer for recommending the sale of high risk illiquid investments to her customers, submitting knowingly false information regarding these customers to her employer, failing to disclose customer complaints and regulatory actions, and of course lying or providing false testimony to FINRA under oath when questioned as to her evil deeds.

According to Investment News, Ms. Holzer also invested her mother’s portfolio in Provident Royalties, which turned out to be a $485 million Ponzi scheme, and Behringer Harvard a nontraded Real Estate Investment Trust which also collapsed in value.

According to FINRA’s complaint, in an effort to circumvent firm rules regarding the sale of high risk, illiquid investments to people whom could not afford it, Holtzer is alleged to have falsified the financial information of at least eight customers.

In one case, in February 2008, Holtzer sold an 86 year-old widow, now deceased, a series of illiquid, high risk investments including Provident Royalties and an unsecured subordinated note or private placement, notwithstanding the widow’s instructions that she was to be invested conservatively so that she would have income and also have funds available to pay her bills.

Holtzer is also alleged to have intentionally overstated the net worth of another customer, a 44 year-old widow with two minor children, by as much as $5 million so that Holtzer could circumvent her firm’s policy, and sell the widow approximately $2,050,000 in illiquid high risk products, as follows: $600,000 Jones Media Group subordinated unsecured notes, a private placement; $350,000 Behringer Harvard REIT I, Inc., a non-traded real estate investment trust; $200,000 Commonwealth Income and Growth Private Fund III, LLC, a Direct Participation Program; $500,000 Behringer Harvard Strategic Opportunity Fund II, LP, a private placement; and $400,000 Commonwealth Income & Growth Private Fund II, LLC, another Direct Participation Program, paying Holtzer what appears to be more than $100,000 in commissions.

If investors were customers of Holtzer, they ought to have their investment accounts reviewed by a professional to determine if they have been the victim of fraud in connection with the sale of securities, particularly high risk direct participation programs and REITS.